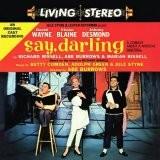 Writer Jack Jordan has written a novel that has become very popular. New York producers Ted and Richard were about to present a stage version of his work. Together with his children and his wife man went out of the house, located in the Midwest, in New York – he was going to take part in the transformation of his novel for future production. After moving to the East Coast, the writer found out that the producers decided to make a musical based on his book. They changed the main character – instead of an Italian captain in the show, now it was a girl from an Indian tribe. Also the region was changed for another, where unwrapped the main actions of the plot.

Immersed in the creation of the musical, Jack participated in the selection of actors for the show. The main role has been given to Hollywood actress Irene Lovelle. The writer was so fascinated by this woman that, forgetting about his family, began to woo her. Rudy Lorraine – former spouse of Irene – debuted on stage in production as a composer. The man tried to blacken the Hollywood actress in front of other participants of the staging. The first show in New Haven failed. It was decided to change a musical, although sponsors were very unhappy with this step. Theatre critics initially were unaware of the shifting of the performances – they said everyone that the show would be presented at the announced time. Richard Hackett rejected several songs prepared for production. Soon he entered in the show a musical number, which wasn’t liked by a writer. But Jack could no longer affect the producer in no way.

Irene decided to stop fighting with ex-husband for the lead in the show – the actress was completely focused on her repertoire. Rudy reworked several songs and added waltz into the histrionics. Nerves of musical creators were very tense as schedule delays had a negative impact on the atmosphere in the team. Thanks to the intervention of Jack, it became possible to finish the second act of the play – it included a new song. Being able to cope with the rest of the details of the production, the creators prepared a show for the New York’s premiere. Musical caused a stir among the public. After some time, the writer has created a new novel. In it, Jack Jordan talked about how carrying out the production of a musical was based on his first work. Soon, the man went back in New York – the producers have decided to create a staging based on the second novel of the writer.
Last Update:July, 13th 2016