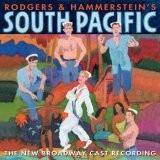 Musical actions carry spectators to the islands located in the South Pacific. The fighting of World War II is at the peak & covers almost the entire world. But against such a terrible event, there was a place for love. The young girl Nellie from Arkansas State tied with a romantic relationship with a man Emile. She is a nurse of the Navy & he is the local planter who moved to the island several years ago. Despite all the horrors of fighting, the main characters do not lose optimism & confidence in the upcoming bright days. A girl sings to his beloved a song about optimism.

In the ranks of American sailors concern is growing. Soldiers missed the women's attention & do not know how to fill their spare time. Mariner Luther has the idea to visit the neighboring islet of Bali Ha'i. He believes that this piece of land was the place of refuge for the French planters’ spouses. In parallel to this event, islet is visited by disguised Lt. Cable. The command center has entrusted him very jeopardous snoop assignment, which is decisive for WWII. An appearance of this mysterious warrior wasn’t unnoticed. Particularly, Mr. Cable was spotted by one of females on the islet – the grass skirts trader, Mrs. Mary.

Being alone, Nellie reviews her connection to her supposedly beloved & adopts a decision – she is going to abandon him. Some hours later, she accidentally met him in the street, she realizes that she cannot do it, because the man was still dear to her. He invites her on upcoming meeting with his associates & she sings a love song to him. Simultaneously, Mr. Cable is about to explore for the sake of start of him war mission on Japanese islet, asks Emile’s assistance. However, a planter refuses & American officer has to hide, waiting for the optimal time to begin the actions. Luther convinces Cable to be his companion in his voyage to Bali island, where the latter is met with girl Liat, an offspring of Mary. As conceived by mother, love between young people quickly arises. In parallel to this, Emile is having a serious conversation with his spouse. She learns that her pair has offspring from local bronze-skinned women. Nellie gets filled with racial prejudices.

Over time, the relationship between Cable & Liat become more serious. However, like Nellie, an American officer shows some signs of racism, in fear that friends & family would negatively perceive his marriage with a dark-skinned girl. After thinking over pros & cons, Cable tells Mary that he must never see her daughter again. Woman is angered & overwhelmed by emotions, says that Liat would find much better groom than the protagonist.

Depressed by refusal to his proposal of marriage, Emile joins the espionage mission, passing in the rear of the Japanese. Planter & American argue many times about racial prejudices, but eventually come to a certain mutual understanding. The mission ends with success: the Americans win a number of important victories & destroy Japanese convoys. However, in a subsequent battle, Cable dies. Nellie heard rumors that Emile also did not manage to survive in the battle. She decides to reject all prejudice & begin to take care of children of her beloved. A miracle happens & Emile returns home. Nellie is overjoyed & agrees to marry him.
Last Update:July, 12th 2016