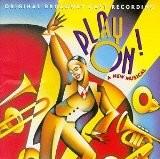 Musical is based on the works of Shakespeare – very popular in the world. For scriptwriters and directors, it is an honor to be able to make a musical based on the plays of imperishable William Shakespeare. To date, 11 works of the author have been staged all over the world (Romeo and Juliet, Hamlet, Midsummer Night's Dream and others). The play ‘Twelfth Night’, written in 1600-1601, experienced for 4 adaptation, from which Play On! differs with music material and time of events. American playwright C. L. West has shifted the action in Harlem of 1940ies. Musical inspirer and author of lyrics was D. Ellington.

With Harlem is tied many resurgences of African-American music. Also, not far from the main theater for blacks of that time Apollo Theater, lived and created iconic person of that time, in particular Duke Ellington.

Musical captivates from the first minutes with its numbers, causing a dip in the difficult times. Then the woman in the music world has been tabooed, as if women on the ship in ancient times were a bad omen, leading to misfortune. Because of this, we must pay tribute to the main character of the histrionics, as she did not retreat from her dream and aimed to realize herself as a musician and songwriter, disguised as a man. She also took a creative pseudonym.

Staging is full of music; it is literally saturated with it. And no wonder, because Harlem of 1930-1940-ies was filled with small taverns with talented pianists and bands playing jazz, swing and blues. Life here did not stop daily and nightly. Jazz celebrities gave concerts and the audience enthusiastically watched them.

In the ‘Play On!’ musical is reflected the center of events famous club, where making for a living and doing favorite things, gathered dozens of dancers, singers and musicians. The life here was boiling literally: daily performances, the search of muse, sincere feelings, love vicissitudes, and at the head of the creative mix – the desire of young women to achieve her goals, despite the rigid attitude towards female authors. Her talent and irresistible perseverance eventually prevailed. Sitting in the hall, watching on the main character Vy, you feel empathy to her, and at the same time, notice that such an attitude to the difficulties would be nice to implement in own life. Life puts obstacles. But only in our hands to maintain firmness of spirit and keep moving forward come what may.
Last Update:July, 06th 2016