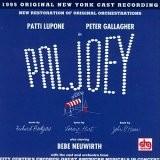 Writer John O'Hara suggested composer R. Rodgers & poet L. Hart his stories about Pal Joey for creation of a new musical. The main character has been featured as immoral, albeit a charming young man. This story is fundamentally different from the usual classic musical comedies, which were popular at the period between Great Depression and WWII. The creators decided that an actor, who played the main role, should be very cute, despite the negative image of his character. After the premiere on Broadway, musical has received mostly negative critics. Despite this, it became pretty long-running show, one of longest at that time created by Rodgers & Hart for Broadway.

Due to the negative reaction of the public and critics, the musical was not allowed to broadcast on the radio, even in the form of individual compositions. The official ban on broadcasting was withdrawn only at the end of the 1940s. One of songs of performance became a hit in 1950. Thanks to this piece, has been produced a recording of this histrionics. The huge vogue of the album contributed to the resurrection of the show on Broadway 12 years after its premiere. In 1957, the play was filmed. In the eponymous film starred: R. Hayworth, F. Sinatra & K. Novak. Broadway’s play in 1952 received 11 Donaldson Awards, 3 Tonies & NY Drama Critics' Circle Aw. Subsequent versions of the spectacular were nominated for several awards: Tony (1963), Drama Desk (1976), and Laurence Olivier (1980). Broadway’s play in 2008 received a nomination for the Drama Desk Award (3), Outer Critics Circle (2), and Tony (4). In 2003, the spectacular has received Barrymore Award.

According to critics, the musical was ahead of its time. History, shown in 1940, found no positive response from the public. After 12 years, the same performance was very well received by critics and audiences. Initially, the antihero hadn’t cause delight of puritanical society. Besides, negative impact of the Great Depression still continued in the US and many people in USA experienced it still. But after World War II, the audience had a different look at the anti-hero of this production. Now they were not so strict to various actions that made characters. The audience also appreciated the ambiguity of Joey, drawing attention to his weakness and daydreaming. This was mostly thanks to charisma of Harold Lang, playing the role of a young rake.
Last Update:May, 16th 2016