On the Record review 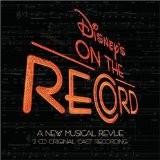 On the Record review

On the Record Review - Broadway musical

After a successful show of three musicals that were based on animated films, Walt Disney Theatrical decided to give the audience the opportunity to get acquainted with the song repertoire accumulated by studio for 75 years, by means of theatrical histrionics. They came to an idea to make a revue grounded on these tracks. Initial production has not reached Broadway. Producer Schumacher & creator Longbottom prepared a special version of the play for the North American ride. They put to producers a task to create a great show with humble design elements that would make it possible easily to transport the production.

Four leading artists were involved in the revue, as well as unnamed singing quartet & an orchestra of eight people. The original decorations placed musicians in separate rooms-boxes, which were located at the rear of the stage. The color scheme of suits of actors is white-black & silver. Only in the end they come out in the red & orange robes. During the show, in the revue was added innovation in the form of a black screen, where was shown dialogues & songs in red text. This detail has helped to take the show to people with disabilities. Digital processing of cast voices, performing live songs, produced the desired effect for certain pieces of music. The musical has the composition there, during which Julian sings in French, Diane – in German, Kristen – in Japanese, Nick – in Swedish. Unnamed Quartet performs some parts of the same song in English & other languages.

Reviews of the nine-month tour, which took place on 24 US cities, were mixed. One critics thought that the story of revue was too far-fetched. Others were not impressed by staging of certain music works. There were critics who were delighted with this performance & talent of actors taking part in it. In total during the tour, the musical was exhibited to 350 000 people. Completing the display of the show was scheduled for September 2005, but due to the insufficient number of the audience, the tour was over ahead of time.

In March 2005, on sale were records of revue on 2 CDs. It was made by actors of the original histrionics except of E. Skinner – she was replaced by K. Hopkins. The album received good reviews. It is possible to hear songs from the well-known animated films such as ‘The Little Mermaid’ & ‘Aladdin’ amongst others. Also included in here works created specifically for the Disneyland. After the tour, A. Brown, M. Inglesby & T. Maynard continued collaboration with Walt Disney Theatrical. Artists were involved in the new Broadway musicals, created by the company. Soprano of A. Brown many listeners found ideal for the realization of Disney songs.
Last Update:June, 25th 2016