On a Clear Day You Can See Forever review 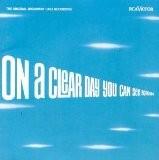 On a Clear Day You Can See Forever review

On a Clear Day You Can See Forever Review - Broadway musical

The play, which is in the core of this theatrical, was written by J. L. Balderston based on unfinished novel named The Sense of the Past. Its publication was in 1917 – a year when author Henry James died. The first recording of the musical was performed in 1966. It included the actors from the original Broadway production. The second recording was made in 1967 with the use of piano-vocal score. In 1970, a musical was filmed. The film was directed by V. Minnelli. Screenwriter was A. J. Lerner. Starring: Y. Montand & B. Streisand with J. Nicholson.

The story of a young woman who was the reincarnation of a person, who lived in the XVIII century, was re-considered in 2009. In the new version, the main character was a homosexual florist. He was born on the day of the jazz singer Melinda death, who lived in the 40-ies & the spirit of a woman embodied in the body of the baby. The young man had a boyfriend, but fell in love with psychiatrist Mark. The rest of the story has not changed significantly compared to the original. The new scenario was created by musical director M. Mayer & writer P. Parnell. The performance raised the question about the legal difficulties faced by homosexual people with desire to marry.

According to critics, this production differed from the original version with a small amount of humor, although the division of the lead role on two performers had enough potential to create many comical situations in the musical. Despite the excellent vocals of J. Mueller, D. Turner & H. Connick, performing the role of Melinda, David & Dr. Mark Bruckner accordingly, they did not do a perfect trio. Stage design in the style of the 60s critics considered too clichéd – at that time there was a lot of productions with the same design. The musical part of the performance has been recognized as excellent. In the last week before the end of the show, a musical’s box office was 614 214 dollars.
Last Update:June, 25th 2016