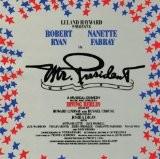 This musical is strongly connected with politics. It is not just a story about love affairs; everything has its hidden motives. We may see it from the romance between the daughter of the President and her lover. He leaves her, when the term of her father comes to an end.

There is a serious issue in the plot. The background of the performance is the Cold War. Here we see how the leader of the state tries to improve the situation. And he succeeds. Even though he is not praised for this for the first time, his hard work is awarded later.

Of course, the plot is not the only thing, which attracts people. It is probably something, people actually do not like. Many of us can say that the spectacle is out of date. It might have been interesting several years ago, but not now. They subject matter is not that relevant for the people. The plot is considered weak.

If we speak about the music – the songs are good. They have been rewritten several times. It was also the last work of the gifted composer Irving Berlin. He was full of inspiration and tried to create fresh melodies. This was one of the reasons, why the musical is worth seeing and listening.

The actors deserve the attention as well. Look at Nanette Fabray, who was playing one of the leading roles. She resembled the first lady of that time – J. Kennedy’s wife. The creators decided to exploit this likeness. And the first lady highly-estimated the show.

The first production failed, but the tickets were sold beforehand, and many people watched the musical. Even after many cuts and revisions, the situation didn’t change. Despite the dull scenario, the work of the cast and all the troupe was fantastic. The director was talented enough, while the songs became hits. In 1963, the show won Tony Award for the Best stage piece. It was nominated for the same award for the Best Leading Actress, Conductor and Musical Director. At least for a few reasons the production should be seen. They are directing, music, lyrics and talented acting. A viewer must be ready for the boring plot and absence of action. If you are not too critical concerning such things, then you can watch this histrionics and enjoy fascinating work of the crew. It will be also exciting for those, who prefer something retro-style.
Last Update:May, 16th 2016