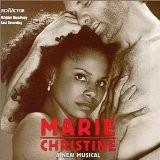 Marie Christine is a very atypical dramatic story. Initially, in the center of the plot is the classic love relationship, not destined to materialize into something more serious for a number of strong reasons. This creation reveals the class inequalities of protagonists: Marie belongs to the old Creole family, and Dante is a sailor and traveler, not accustomed to living in one place. But with the transition to the second act, the musical adopts a new perspective. Romantic line literally crumbling before our eyes, and on the forefront shown heavy emotions of the main character. At this point emerges a completely different side of Marie, manifested in her penchant for dark rituals, including the ancient voodoo ritual. Certain magical abilities conveyed to the heroine from her mother. She has long struggled with them, but finding herself in a difficult situation, she gave up and fell into the abyss of dark sorcery. Such a complex and multifaceted character freed the hands of actress Audra McDonald. The latter has done her job and was able to demonstrate the transformation to the viewer of her character: from a naive girl in love, to the secretive two-faced woman, capable of killing own children.

Absolutely all representatives of acting troupe, in addition to their artistic talents, have marvelous voices. In the composition of Marie – ‘Your Name’ – all mastery of Anthony Crivello appears. Already dramatic song in his performance takes new senses of tragic. As for Audra McDonald – her singing is characterized by a remarkable ability to convey the meaning of music directly to the hearts of beholders.

Throughout the show, the audience possesses the feeling of presence of the atmosphere of witchcraft. This is due to directors, who were able to transfer to the stage the colors of New Orleans with all its carnivals, witches and so on. Lighting engineers did fantastic job. They throughout the play successfully varied illumination of scenes to keep the mood. This is best seen in the episode with the performance of the composition ‘Mamzell' Marie’, when the initial light background turns rapidly blue and really frightening things begin to be exhibited. The creators have made every effort to reveal unusual and original things in the best possible way. All viewers were impressed – that’s for sure.

The performance received mixed reviews from critics. The most influential surveyor from The New York Times, Ben Brantley, noted the excellent vocal performance of Audra McDonald, and said that during the whole concert, he had a feeling of presence of the witchcraft on the stage. M. Feingold from the Village Voice was in solidarity with his colleague, but in an article, he had made a greater emphasis on the importance of Graciela Daniele for the musical. According to him, the director has a huge range of techniques and methods that enabled it to work thoroughly every single scene.
Last Update:May, 12th 2016