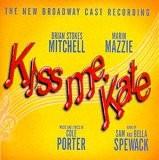 The main characters are actors who rehearse Shakespeare's play. There are the following people in collective: a director Fred, playing a major role and his ex-wife, the main actress. Couple constantly quarrels. Lilly is jealous him of young Lois, who plays Bianca. Her friend Bill misses rehearsal, but appears after it. The girl is in love with him. He says that he has written down a large sum of money on the name of director.

Lilly reminds Fred that one year from the moment of their divorce has passed. They remember their past with dancing and romantic music. Later the woman receives flowers from the ex-husband and admits that she still loves him. The card, which is addressed to Lois, is attached to flowers, but Lilly promises to read it later. Meanwhile, gangsters press Fred to return them money, but the man doesn't even know about it. Mobsters promise to return for his soul.

During a performance, Lilly reads a card. She is very angry. Suddenly the woman steps on the stage and hits Fred. Fred doesn't keep it up and slightly hits her. After a performance, Lilly declares that she leaves. But in this case the man should close a performance and he won't be able to give money to gangsters. They promise to take care of that Lille remained. On a scene, Fred asks the heroine to kiss him. The woman refuses. Then Fred takes her and bears behind the scenes. The performance continues. Fred's character tries to tame Lille. Meanwhile, her groom comes there. Lois understands that he is her former beloved. She promises not to tell Lille about it. Bill incidentally hears over their conversation. The girl says that everything is in the past and she loves only him.

The head of mobsters was killed. Now they don't need to ask Fred to return money. Lilly's groom wants to prepare for a wedding. He doesn't believe that the woman is detained in theater by gangsters. Fred says that life of Lilly will be boring without theater. But his attempts are unsuccessful. Lilly leaves alone. Actors play a performance without her. At the last minute, she appears on a scene. Love couples (Fred and Lilly, Bill and Lois) kiss.
Last Update:April, 20th 2016