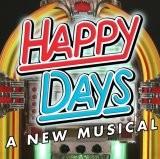 Action of the musical happens in Milwaukee. In the center of a plot, there is a Cunningham family: the teenager Richie, his father Howard, owning household shop, mother-housewife Marion and younger sister Joanna. The story is concentrated on life of Richie and his friends — Potsie, Ralf and Fonzie. Richie is going to enter the college. His friends and a family gather in Arnold's restaurant. He says that they are going to construct a shopping center to replace his building. Arthur wants to prevent it.

Laurie speaks about the desire of other girls to enter the institute and about the reasons why she doesn't want to do it. Suddenly, the group of boys comes. Chachi reports that a dance competition will be held in the city. The boys begin to rehearse, understanding how little they actually know about those girls. Howard suggests his friends “Leopards” to take part in fighting competitions. They promise that if he manages to defeat Fonzie and Malachi's brothers, the memorial board'll be provided to him. Fonzie and Pinkie meet after long separation. Their feelings flash.

Chachie and Fonzie speak about the girls. From this conversation, we know history of Fonzie and Pinkie. Chachie asks, how to understand, everything's over and also how to know the girls better. Fonzie claims that it is necessary just to listen to your own heart. Howard has refused to Marion. She thinks of becoming a housewife. Joanie, who complains of one-way love, joins her suffering. Fonzie has a choice: to be dishonored or to have a risk to get a serious injury. He decides to leave.

After some time, he disappears. People around understand that he is important for them. Richie says to the friends that he will be fighting instead of Fonzie. Ralf is against it, but the others convince him that it is necessary for a victory. Pinkie says about the fluent character of Fonzie. She makes Joanie think that Chachie could make the same. The escape of Fonzie isn't successful, he comes back to the city. Understanding that he can lose his prestige, he feels lost. Later, Marion finds Fonzie. Marion reminds him - cool guys don't worry about what others will think. The guy stays alone with his thoughts. Competition begins. Suddenly, Fonzie appears. He agrees to participate with one condition: opponents won't touch his sore knee. Finally, his team wins. Enough money was gathered to save Arnold's business. A graduation party takes place. All remember their happy days and prepare for not less bright future.
Last Update:April, 06th 2016