Glorious Ones, The synopsis 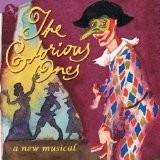 Glorious Ones, The synopsis

Glorious Ones, The Synopsis - Broadway musical

The viewer sees The Glorious Ones troupe consisting of seven people led by Flaminio Scala. He starts telling a story, taking the audience to Venice of the 16th century on a piazza. He tells how he was brought up by monks and later was thrown out on the street. Then he got inspired by the idea of creation a new type of a theatrical genre.

We meet the dwarf, who loves Flaminio, named Armanda Ragusa. Together they rehearse a funny scene, when Columbina interrupts them. She is the mistress of Flaminio. After that, we see the following participant of their company, whose name is Pantalone. Dottore Graziano, who performs as a quack, sold him a special magic elixir that could help the man with catching Flaminio's mistress, but the elixir didn't work.

Later, the audience meets an artistic young comedian, whose name is Francesco Andreini. He is taken under Flaminio's wing. Francesco inspires Flaminio on creation of Arlechino's character, which role he gets, at last. Further, Charlatan Dottor thinks out a new adventure for troupe – to perform their comic sketches in France.

In France, they begin representation from some vulgar scenes that are developed into the performance filled with platitudes. However, Flaminio doesn't get success & popularity, which he has dreamed of, the comedians are simply expelled from the country. The leader is infuriated and vulnerable, but he convinces troupe of correctness of the vision. Francesco is the only one who doesn't trust him.

Soon the beautiful girl named Isabella joins the troupe and becomes Francesco's soul mate. Francesco gives her a role of his mistress, breaking up with Columbina. In the following scene, Flaminio and Isabella act the main couple. However, the girl decides to make joke together with young Francesco, and his character begins to act instead of Flaminio. The comedian thinks that these two are laughing at him and that irritates him.

Then he is offered a new comical role – Captain Spavento – by other participants. The comedian agrees unexpectedly. His ex-mistress suggests him to be together, and he accepts her offer.
Flaminio can't perform as Spavento, he takes off his mask and starts improvising. He parodies suicide because of love, as he did earlier. Columbina playfully prays over his fallen body, but suddenly understands that he really killed himself.

While actors grieve about his death, the man rises and turns to the antecedents, comprehending everything that he did. Other actors join him. At the end, all of them appear in Heaven and understand that their comedy has gone through so many centuries and exists nowadays. A curtain is closed and we hear their joyful laughter.
Last Update:April, 06th 2016