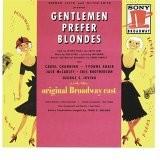 Who won't like the musical, cheerful, bright, interesting, bewitching, dazzling and positive comedy with beautiful girls on the stage and perfect songs, which have already become cult? Maybe the plot is quite plain (read: very plain), but its simplicity finds out in itself a special charm that will please even the most experienced and picky viewer.

Besides the brilliant performing part, the musical gladden with tremendous songs – just remember the legendary "Diamonds Are a Girl's Best Friend" which has become probably even more popular, than the movie – perfectly staged choreography, which helps each actor to open the apogee of the artistry and charisma, and witty jokes. A comic piece of the musical is really at height. That's a pleasure to watch the charming blonde continually getting into various scrapes. No wonder that Lorelei's role brought to her first performer, an actress Carol Channing, so resounding success.

However, it is necessary to mark out the gorgeous actress and singer, Megan Hilty, who acted as Lorelei at the New York City Center in 2012. Hilty was not only the cause of the audience’s delight, but also received only rave reviews from critics. No wonder that after such an excellent show she was rated on par with Marilyn Monroe and Carol Channing. Besides Hilty, there were such well-known names, as incomparable Brennan Brown, Simon Jones and Rachel York. Considering these stars, as well as perfect direction and choreography, there are no questions why it was quite difficult to get tickets and the hall was overflowed. It was worth it, though.

Versatility of the blonde’s role also was introduced by Marilyn Monroe, starring in the movie of 1953 of the same name. That's impossible not to admire this talented girl, a little naive, charmingly flirting, light-minded, but clever and able to get out of any, even the most difficult situations.

Classical scheme: adventures, intrigues, cruises on the ocean liner, millionaires, canaries, magnificent dresses. Rich life. Rich with everything: emotions, impressions, pleasure — from thought that you live and you live well. The Great Gatsby – similarity in luxury, fast life and love peripeteias is involuntarily remembered, however, the drama component of the last one is much stronger. Gentlemen prefer blondes – an easy-going thing, what makes it nice, doesn't apply for serious philosophical reflections, but leaves pleasant aftertaste. Recommended to everyone, who wants just a pleasant recreation.
Last Update:April, 06th 2016