The Last One You'd Expect lyrics - Gentleman's Guide to Love and Murder, A 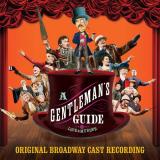 The Last One You'd Expect lyrics

The Last One You'd Expect


Jefferson Mays:
Look at him
No denying he's humble stuff
But it fills up this poor old heart
When I see how well he's done

Sibella:
Who'd believe that Monty Navarro ever would come so far, so fast?
Never seen a man so keen to over come his past

Now he can live in princely fashion, as the D'Ysquith name requires
He can pursue with all his passion everything he desires

Monty:
Will I see you again?

Sibella:
Well of course!
Some might have thought him unsuitable
They were of course incorrect.

I always believed in Monty Navarro even though in retrospect

Who would have guess whose bell I'd ring this very afternoon

Sibella:
Only just unpacked from my protracted honeymoon
He's the last one you'd expect

Women:
Miss D'Ysquith, pardon me, Mr. Navarro is here to see you

Pheobe:
Look at me
So completely in disarray
Barely able to face the day
Shall I say I'm in disposed?

Some might have thought him unsuitable
But what was me to object?
Who but he
Stood beside me to comfort me
Out of all of the family
He's the last one you'd expect.

Ensemble:
Look at him (look at him now)
No denying his humble start (who would have guessed)
But if fills up this poor old heart (I am impressed how he's progressed)
When I see how well he's done (a wife omits her obligations, is allowed to have her fun)

Monty:
Only two people left still alive who stand between the Eldum and me
Only two who survive who are still above me, on the D'Ysquith family tree

Is the next one my employer, Asquith D'ysquith?
But he has treated me so well
How ungrateful to remove him after all his kindness oh what hell

But remember he was hateful, Asquith D'Ysquith, was the cause of mothers grief
He denied her
Vilified her
Took away her birth right like a thief

On the other hand
Has he not been rather decent
Making me successor
Must admit I hate to do it
I've grown rather fond of him
And?

Pardon me Mr. Navarro, It is my sad duty to report that Lord Asquith D'Ysquith has gone to his great reward.

Heart attack. At least he did not suffer sir.

Only one above me on the tree

Spoken, Jefferson Mays:
After the tragic demise of Lady Salomé, the sudden death of Lord Asquith D'Ysquith brings to seven the number of heirs to the D'Ysquith fortune who have died since last year.

It's astounding and peculiar
Yes how utterly peculiar