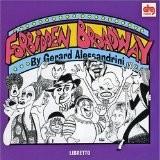 These are the first four collections of music from show (after years, they’ve been collected in one box), which began as off-Broadway in 1982 and lasted till November 2014 (not continuously, but with interruptions), noted in 2014 its 32nd anniversary. Some of people and even Wikipedia consider it not as pure Off-Broadway, but Off-Off-Broadway (well, at least, some of its parts). However, such an unusual title had no effect on its content – show tells all about the same – it is a parody of Broadway musicals, West End, off-Broadway shows, music, movies, famous people, and TV broadcasts. Somewhat Overindulgent song is a strange combination of impressive human in size and high, gentle voice, accompanied by playing the piano with such fingering of keys, as if it was a harp. Chita-Rita song – flows with Hispanics emphasis on fun by a girl trying to depict Spaniard, but in appearance, she is not. Here performed a parody of both Chita Rivera and Rita Moreno. Other scenes include a parody of The Phantom Of The Opera, and the song Be Depressed – pretty life-affirming thing, with deliberate accent of the English-speaking person, who pretends not to know English (for that, he has too good average American pronunciation) – listeners meet parody here on various entertainment tunes (by the way, the accent at the end of the song completely disappears).

Admirers of these Off-Broadway shows can buy this collection of four disks, saving on every single part. This show is a kind of phenomenon – the only one of these that parodies other shows, staging for 12 years at the time of the release of this volumes. Number of shows at the time of writing this remark crossed 34 years, and Gerard Alessandrini, its creator, is, with no exaggeration, the all-in-one creator of this show – he had an idea, wrote it, elaborated, brought to life on stage, choreographed, and also played in it, directed, and then has been rewriting it approximately one and half times each year during its first 12 years to ensure that the public each time receive full freshness.

In total, the collection, among others, was a parody of such: Forrest Gump, Casablanca, The Wizard of Oz, Pulp Fiction, Aladdin, The Phantom Of The Opera, Evita, Annie, Amadeus, Grand Hotel, Kiss of the Spider Woman, as well as on the well-known personalities in the world of Broadway: Ethel Merman, Carol Channing, Madonna, Sondheim, Michael Crawford, Dustin Hoffman.

The show originally went for 2.5 years before the first closure, and given within this period 2330+ exhibitions. In total, at the time of this writing, it has been performed for more than 9000 shows and the quantity of visited locations of more than 200 cities & towns across the United States’ territory and several other countries. Particularly popular the show was in the United States because Broadway runs are mostly familiar to American public.
Last Update:April, 06th 2016