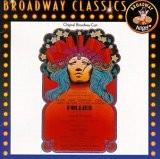 Critics have many opinions about the various productions of this musical. For example, when talking about its original on Broadway in 1971, it was a financial failure, but the plot was exciting, so over time is became a classic. The failure of that was because of actors living in different worlds – in the ghostly & human, so not always the audience understood which one is displayed currently at any given time. If we talk about a completely redesigned staging in New York in 1995 (which was played about in the same form as the reworked version of 1989 in the West End), a striking difference in perception becomes evident. Here, critics said that the show deserved a standing ovation, and a level of one was good enough to wait (for such a good play) for many years. It was a lot of burlesque that fans of Sondheim loved. Although some questioned whether the processing of the libretto adequately reflected the ambiance of the original work of Sondheim, the premiere evening was truly fantastic. On the other hand, The Times were not in great admiration, and said that the musical was a decent idea, not overgrown into incarnation of a nice story. At the same time, all praised the joint work of Oscar Hammerstein II and Sondheim, who created a delicious masterpiece of music, which fully reflects the surroundings of recent years Broadway with its nervous and ironic musicals, making this production still gentle and lyrical, thanks to numerous inclusions of hope for subtle love, which especially finely transmitted by aged characters. They are able to do it without that fervor that is inherent to youth, thinking about each step and giving these shades, which give birth to the magic of the evening.

Almost every play of this musical on small sites collected a full hall and tickets were always impossible to get. The show closed on small locations because of the fact that the actors were paid very little and show extension threatened with the revision of the financial conditions. Large hall’s occupancy has not always had necessary filling to maintain its payback even at a zero level of ROI – about 70% of the seats. On various unsuccessful productions, critics spoke these lines: the Follies was a dramaturgical failure but a spectacular show, incompatible with long duration. Musical "delivered only half of happiness to the audience", someone fell in love with it already in the first act, and others have disliked it. In general, criticism evaluated every new version of production of the show very polar, which did not prevent it to be reborn again and again, as Phoenix from the ashes.