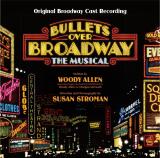 This musical is a re-processing of the film of the same name, which was directed, written and done by Woody Allen in 1994 – 20 years before the musical. It is talking about a young, charming but not very talented writer named David of 24 years old, who comes to the big city to make a musical.

Money for this idea, of course, he hadn’t, but he did not grieve, and came to the large mafia boss who decided to sponsor a musical. In return, he requires that the main role in it must be played by his girlfriend, mediocre and dull Olive. She has the same intelligence level as this plant. In addition, she is spoiled, demanding and eccentric lassie. But, as it turns out, she has a highlighted maintainer, one of mafia who monitors the progress of implementation of the musical and watches after Olive. And he turns out to be a miraculous generator of ideas for improving the production. At the end of the play, when the musical was ready for presentation, its original appearance has been changed so far that it can be said that it was completely re-written. But David gives all changes as his own, to exaggerate his talents.

But that is not all. Star named Helen Sinclair, which is really talented, plays in musical one of the leading roles, and in the course of its development, is attracted to David, twisting in an affair. Olive was also liked by one of the leading actors named Warner, who does not know about the fact that she is a wench of the gangster.

This real musical ends with the first staging of the musical within it, which was quite well played, regardless the fact that at first it seemed impossible to realize it not with failure, but convincingly.
Last Update:April, 06th 2016