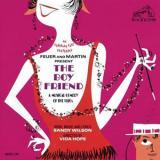 The action of the plot takes place in 1920 at a school for decent girls of Madame Dubonnet's Finishing School. We see a group of young girls standing in the beautiful dresses and discuss that they are perfect. Their maid did not agree with this, and they were engaged in the dispute. Then the audience learns that Polly's father forbids her to have a friend. Any boy, according to his opinion, can strive only for family wealth and not actually to fall in love with her. Then comes Bobby, who is romancing with Polly and persuaded her to give him all the dances at the ball, which everyone are waiting with anticipation.

Madame Dubonnet meets Polly's father and they realize that earlier, in their youth, they have already met and even dancing. They now are swirling in dance and kiss.

The messenger, who brings the parcel to Polly, falls in love with her at first sight, as she does the same to him. They agree to go to the prom together and meet tonight. Then the father of Polly and she sing together.

After their meeting, they quickly come together and dance, almost kissed, being interrupted by their maid, from which Polly takes the word not to tell to Madame Dubonnet, and they run away. Bathed girls walk into and tease the maid.

After some time, lovers caught in a kiss and the one, who found them, calls the police, because he thought that he was not her lover but a thief. And Polly will not go to the ball, although really wanted it – her young boy fled, fearing a meeting with the police. Then he still goes to the ball, getting the information that the girl is heartbroken. She dresses like a Pieress, and he is like a Piero and their parents are on the ball too. It turns out that he is the heir of the great wealth, as she is, and their parents are happy with such meeting. At the ball, a lot of boys explained in love to many girls, and those at exactly 12 o'clock at night tell them a resounding "Yes", and all dance happily.
Last Update:April, 06th 2016