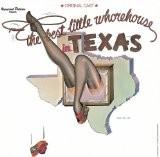 In the musical, we are talking about a brothel, whose history is for a hundred years, and it is controlled by the owner named Miss Mona Stangley, which is very concerned about her girls working there. The previous owner had left her this institution. About the reasons for this reckless act, it is not specified during the course of the story.

Of course, such activities cannot be without “protection” and the local sheriff Ed Earl Dodd actively operates on this, who is having strong business relations with the owner. Even his name as if drawing a picture in our heads of a brainless fat fellow, whose mind only filled with lust, but he certainly visits church and maybe even married.

The town, in which the events unfold, is unremarkable and is located in Texas. Has made-up name Gilbert, seemed to symbolize its provinciality. It, however, has the underlying real name – a town called La Grange, which is also located in Texas. The information regarding the availability of real twins does not end with this. Next, we meet a journalist named Melvin P. Thorpe, who also existed in the reality and was named as Marvin Zindler, from Houston, which was engaged in news and madly loved to dig out all sorts of interesting stories. So, this sneak learns somehow about the presence of the brothel and arrives to the city to conduct an independent journalistic investigation. Of course, the sheriff, and the owner of the brothel try to bribe him, to persuade him not to do it, but the events unfold in such a way that he publishes an article with an investigation, in the newspaper.

The effects of his work are far-reaching and the brothel is shut down, because of political disturbances. The musical, however, does not contain the prerequisites ensuring that it will not operate again after everything settles.
Last Update:April, 06th 2016