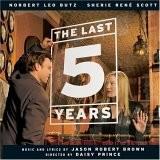 This is musical drama of the new generation. Music, lyrics, songs – all created by a single person, whose name is J. R. Brown. Off-Broadway show took place in March 2002. In the future, many interpretations of the musical were under production, but none of them could repeat the success of the original.

There are many guesses about what was the basis for The Last 5 Years. The answer is the story of relations of J. R. Brown with his ex-wife T. O'Neill. Last one noticed in creation of her ex-husband too many coincidences to their real life. Once she even threatened to file a lawsuit, but after Brown changed scenario a little bit, the woman discharged her position.

Most critics responded flattering about this project. They noted the irregular structure of the musical and interesting narrative style. Actions go in different time intervals. According to the director, he wanted to give the viewer a more detailed study of the emotions of the main characters, their stance and attitude towards each other.

The musical is characterized by a wide variety of music. Lyrical songs dominate, among which stands out the song Still Hurting by S. R. Scott (Katie). There is more exotic music like Latin. At the time, The New York Times released an article that expressed admiration for the way the director has managed to combine harmoniously in the project a large number of musical styles.
Release date: 2002
Last Update:April, 21st 2016