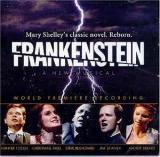 This musical had two major openings: under the Off-Broadway run in New York and in Germany. In the first case, there were such cast: J. Stanek, A. Serotsky, H. Foster, E. M. Gillett, S. Blanchard, M. Bruno & C. Noll. At the opening in Germany, a composition of the cast was: K. Lamers, N. Ernst, S. Haberkorn, B. Bosbach, T. Placzek, A. Kleimt & V. Domik.

The creators thought that the lead role – Monster – would take Christopher Bentivegna, but it did not work as he was too busy. Drew Sarich also jumped off, who was going to depict the monster’s Creator, Victor. Preliminary readings and a small representation of results were completed in 2006 and at the end of the fall season a year later, the play opened at 37 Arts Theatre. Spectacles were pretty unsuccessful and resulted in only 95 shows, if to consider together with the preliminary plays, by the end of the same year. Despite the failure, a national tour was launched in the same year’s autumn and a year and a half later, redesigned production was held in Civic Theatre, though not in NY, but in Indiana. The same fate was waiting for it – it was closed a month later.

United Kingdom saw this histrionics a month after the closure of Indiana, in The Stables Theatre, where in the main roles were involved M. Barber & A. Wright. Spectacle got a couple Kenny Awards – unintelligible likeness of the award, as the best production (in the off-West End’s format).

The German premiere was another 4 years later, in 2013 under the direction of Stefan Haberkorn, where Vera Domik was both translator and played one of the roles. Again, a resounding success hasn’t follow, but, nevertheless, the Australian premiere took place in Melbourne in 2014, at the beginning of the winter season, under the supervision of Williamstown Musical Theatre Company.
Release date: 2007
Last Update:February, 24th 2016