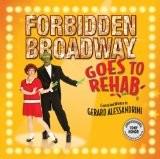 Originally, the show was launched in 1982 and now it has stepped over in 34 years-old after the first show. Last part, Forbidden Broadway: West End, was shown in 2014, embracing the 32-year anniversary. It is noteworthy that there was a record number of music albums from this show – as many as 13! So many music publications on CD experienced very little amount of even big shows staging for a long time. For example, the longest Broadway show in history, The Phantom Of The Opera, also has 13 items, but they are not drawn from the different versions of the show, but from its various sites – means, in different languages (including Japanese, Mexican and Korean among others).