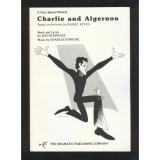 On Broadway, the show was running only for 29 plays, of which 17 were regular. It is unclear what caused such a small number of ones, because spectators perceived this musical generally positive. Michael Crawford, a guy who starred in The Phantom Of The Opera (having received his Tonies for this), was in the premiere of this one. Flowers for Algernon – this was the original name of this musical at the opening, during the pre-Broadway plays (in West End), and then the show was renamed to Charlie and Algernon, when it went to Broadway.

Among notable developments in this musical, there was a kind of mini-show with trained white laboratory mouse, which crawled from one arm of Michael Crawford to another. He then repeated this trick in another show called The Woman in White, despite the fact that he was depicting a very different character.

Helen Hayes Theatre on Broadway hosted the musical as we have already mentioned, during only 29 shows in 1980, where the main role was played by P. J. Benjamin, who starred in the title role of Charlie and Sandy Faison played his governess/teacher/beloved. In 1981, the musical was nominated for Tony, but did not receive this award.