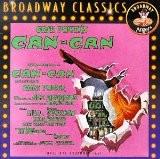 Shubert Theatre, which is in Broadway, took a musical originally in 1963, and it lasted for 892 performances due not so much to a story as to a passionate and even while slightly exotic dance – "Can-Can", performed by charming and fascinating members of the musical. Actors were: E. Rhodes, Lilo, P. Leeds, H. Conried, D. D. Wood, P. Cookson, D. Krupska & G. Verdon. Choreographer was Michael Kidd.

After success on Broadway, the musical moved to the Coliseum Theatre in 1954 and went there for another 394 shows. Jerome Whyte was a director. The actors were as follows: W. Mitchell, I. Hilda, G. Lynne, E. Hockridge & A. Marks. Resuming on Broadway at the Minskoff Theatre took place 18 years later, in 1981, but it was not a success and closed after only five performances and 16 previews. Choreographer this time was Roland Petit. Critics vilified it as a second-rate material and humiliated otherwise.

Another attempt was in 1983 at St. Louis, with the actors: B. Leavel, J. Kaye, L. Yarnell, J. Reardon, L. Leritz & J. Schuck. It was a great success, where critics praised everything from excellent performance of dances to the brightness of the characters and to the grandeur of their play. London took the resurrection of it in 1988, for one season until the 1989’s beginning. The distinguishing feature of this production is that it was completely redesigned, starting from songs and selection of actors, to their costumes and choreography. The libretto was rewritten as well.

Further performances were as follows: in 2004, in a City Center; 2007 in California, Pasadena Playhouse. Since then, new shows not yet have been released, despite their success and new re-thinking.
Release date: 1953
Last Update:January, 13th 2016