Best of Broadway, The Musical Lyrics 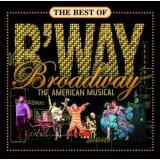 Best of Broadway, The Lyrics

In addition to the collection of the best songs from Broadway musicals, big screens, and other places, for example, a prominent West End, that are represented here, each of these songs (most of them are, of course, with choreography) is in its way a little (or big) work of art. Besides the fact that with the same title came out a couple of different works – from the TV show to the collection of the best pieces. Actually, this collection is the result of inspiration from watching the show. And it definitely had something to be inspired of – the show on your screens went for 4 months in 1955, every time introducing some of the best pieces of music so our soul would voluptuously enrich with splendor sounding. Each episode had its world-class actors – their big names you'll see in the "Synopsis" section.

It can be said as it was a mixture of documentary videos and the best pieces of art work that you may have seen on the stage, and may have heard on radio or seen on TV (just like TV version of Cats – it is very popular along with the musical, but a piece from the TV show was included in this collection, not from the stage).

Besides the TV show, it was also the audio play where the brightest moments were aired – not all, of course, pieces of music that entered here, but there were many others, as the air show lasted over 3 weeks – it is long enough to play many.
Release date: 2004
Last Update:December, 10th 2015