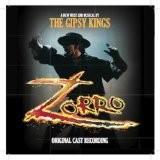 Material is light enough and is not meant to be delightful in the form of unexpected twists. Rather primitive and expected, but that does not mean – not interesting. Yes, the story is linear, but the question is how to play it. Some of the actors here are pure beginners, and some already have some stage experience. S. C. Barker and M. Randazzo played their first roles in the musical (they got the leading roles of Zorro and Mrs. Sweepup), and P. Proczko had some experience. He is an interesting fellow. He impresses with his ability to make a cat's eyes, coupled with its pseudo-Mexican accent. S. Lydic plays a sheriff; J. Bowen plays B. Badum, which is arrogant and unscrupulous owner of the bank in town.

Some critics do not like the fact that the acts themselves were vague, unlike the olio, which was presented during a break between them, before act two, saying it was brilliant. Many dance, mix of clothes, mad passion and the potpourri of burlesque, scenery changes, characters cutouts, as well as the kind of intervention from director in attempt to explain his vision of this staging.

Kerrie Korzatkowski responsible for the choreography, which included a need not only to put the actors to dance and move, but also a large puppet in the height of a man, which was created by Megan Hovany and we are very grateful to her for such a fresh approach to the presentation of the story.

Entrance in a hall was free and it may be due to the inexperience of the actors and due to some improvisational style that is inherent to those who learn and comprehend the new, who has not developed their unique scenic behavior, which will determine the future of the actor for years. But circling a hat for donations after the presentation does not look very natural gesture – perhaps they should make payment at the entrance at least symbolical?
Release date: 0000
Last Update:December, 02nd 2015