My Name will always be Alice Musical Lyrics 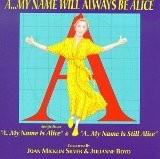 My Name will always be Alice Lyrics

This musical is A revue. Creators are J. Micklin Silver and J. Boyd. For the first time the show was staged in 1983 in New York. It lasted from November to March 1984. L. Godfrey, R. Graff, P. Pen, and G. Roberts became the first actors who have played in this theatrical. The following actors’ structure included R. Brown, M. Graff, G. Murray & C. Woodard. Such composers as D. Zippel, D. Katsaros, W. Holzman, took part in creation of this show. In total, 21 songs sounded here. Y. Adrian became the choreographer. The musical was awarded with Outer Critics Circle as the best revue.

A format of the show represents various scenes of women. They all are several ages old. One of them is a little girl and other – old woman. Usually the names of heroines aren't told. Instead, number names, for example, the 'actress 1' is used. Often they list names of their friends and relatives in format of alphabet and tell about their life.
Release date: 1995
Last Update:May, 16th 2016