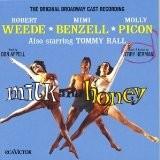 The basis of the musical is the book written by D. Appell. Wonderful songs were created by a composer Jerry Herman. This performance appeared to be the first Broadway show based on a book for J. Herman.

G. Oestreicher, who became a producer, was looking for talented composer, who would be capable of creating music & lyrics for the story about Israel. Both the composer and the author of book were sent to that country to find out more about its culture. They managed to get enough inspiration there. Albert Marre became a director of the musical, while Donald Saddler did his best in choreography.

The first trial run of the performance took place in 1961 at Shubert Theatre. Critics were very positive about it from the very beginning. The leading role was given to Molly Picon, who played amazingly. She became one of the favorite actresses, that’s why an extra song was created for her.

The second staging was carried out in Boston at Colonial Theatre. Then, the following month in October, a Broadway premier came. This production of musical was staged at the Theatre of Martin Beck. There were more than 500 performances. Besides the main actress, the following stars took part in this show: M. Benzell, R. Weede, and T. Rall – a wonderful dancer and singer. H.Gingold replaced M. Picon in the leading female role later. For the Broadway version, Max Goberman was chosen as a director. The production received great praises form critics, including ones from the New York Times.

Many years later, the performance came back to life. In 1994, it was staged at American Jewish Theatre. There were about 60 performances in total. After several years, it started at the Melbourne Recital Centre. It happened in 2011.

Being extremely popular, this musical managed to get nominated for several Tony Awards soon after the premiere. In 1962, the nominations included the ones for the Best Musical, for the Best Costume Design, and some others.
Release date: 1961
Last Update:May, 16th 2016