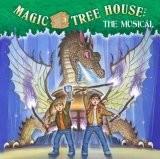 Magic Tree House is based on a series of books of the same name of the famous American writer Mary Pope Osborne. They tell about the adventures of a young brother & sister Jack & Annie who without fear or doubt get to the aid of many legendary heroes including the famous King Arthur. Wil Osborne – husband of aforementioned writer has developed the project’s script. Music & lyrics written by R. Courts. It is worth noting that these theatrical figures have had to work in tandem. Fifteen years ago, they have created a very successful musical The Wonderful. This time the audience expect to behold the result of their work to see high-quality and interesting creation.

The first show of Magic Tree House held in Warner Theatre in spring 2007. Closure took place in the autumn of the same year. During this period, many performances in 55 cities across the country have been organized. In the role of the director was Joe Harmston. His team includes set designer A. Dodge, lighting designer M. Richards, costume designer S. Lams, and doll modeler M. Brehmer.

Because of its genre orientation, the project could not seriously claim to any theater award nor nomination. However, this did not prevent the Magic Tree House to get pretty good reviews. The audience noted the ease and goodness of creation, and the critics were not afraid to call it one of the best fairytale performances of the 21st century. The New York Times wrote about the musical the following: on the stage, creators show us a fascinating combination of music, storytelling and stage action that would give pleasure not only to children but also to adults.
Release date: 2007
Last Update:May, 16th 2016