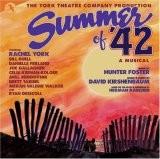 This theatrical is an adaptation of the eponymous film of 1971 and the autobiographical novel by Herman Raucher. Despite the success of the film, a musical based on it was created only 30 years later. In 1998, actor Hunter Foster went to producer D. Kirshenbaum and asked him to perform the adaptation of the film. The composer agreed to take part in it, but if he would receive permission from the owners of the rights to the film and the novel. Foster's and Raucher’s lawyers within a month agreed to provide authority for the implementation of the script adaptation. The world premiere of the show took place in 2 years after the first step in the creation. The author of a book was present at the New York’s show in 2001. H. Raucher was very happy that someone decided to make a musical production based on his brainchild. Organizers of the show offered a discount on tickets to the Second World War participants and their families, as well as ex-military men. On the imminent closure of the production affected the situation prevailing after the terrorist attacks of September 11th. The performance received good reviews from critics, but it did not help it to get to Broadway. In the future, production entered in the repertoire of the student’ and small theaters of the USA. The musical introduced a new generation of young Americans with a book and a film of 1971. The show was released on DVD and novel was reissued. They started to distribute them across the Internet.

Many theater critics regretted that the show has entered the stage in a very unfortunate time, and noticed the quality of performances, despite the absence of famous stars in production. In the opinion of those reviewers, the authors have managed to create a unique musical about the problems faced by young adolescents, based on the novel. The theatrical show had three different characters: timid Benjie, discreet Hermie and cheeky Oscy. Despite the general interest to the taboo topic, each of them managed to reveal themselves differently. Benjie was closest to platonic relationship with the opposite sex. Hermie fell in love with a married woman older than he is at seven years. Oscy sought to fast sex with peers, without any obligation. The trio of girls – friends of the main characters – often acted as a Greek chorus commenting the plot that surely added humor to the story. The transition to the drama takes place towards the end of play, when a teenager begins to notice the loneliness of a young soldier's wife. Ryan Driscoll could easily pass youthful uncertainty of his character, as for an actor it was the debut role on the stage. Before that, 16-year-old man worked as a janitor in the Goodspeed Opera House. Teacher of vocal sent him to casting hearing that around there was an audition at new production. Continuing to go to school, the boy got the lead role in this play. Later critics regretted that upfront the future New York’s show, many participants matured and lost their teenage charm.
Last Update:July, 13th 2016