Subways Are for Sleeping review 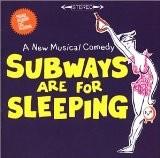 Subways Are for Sleeping review

The musical is based on an article in ‘Harper's Magazine’ in 1956, telling the story of homeless people sleeping in the subway, and a book written by Edmund G. Love in 1957. The author of a book himself went through life in subway cars in the 1950s. Several years later, A. Green & B. Comden created a new story based on this musical. Despite the fact that the music for the staging written by famous composer Jule Styne, the show has not received the recognition on Broadway. When D. Merrick realized the plight of the musical, he decided on a very risky step. The producer found the people whose names were identical with the names of well-known New York critics, and invited them to watch performances. Treating them with dinner afterwards, D. Merrick asked for permission to use their names in advertising the show. After reception of written consent, he prepared an article about the musical with laudatory opinions on behalf of these people. When the advertisement was sent to the newspapers, only one editor became suspicious. His was confused by the picture of a black man – he knew exactly that this critic with that name was white. Calling to other publishers, the editor managed to stop the going out of advertising. Only early paper ‘New York Herald Tribune’ came out with good reviews from alleged critics. But it was enough for this spectacular to stay afloat on Broadway for almost six months. Subsequently the show was criticized by real reviewers. Several years later, Phyllis Newman recalled that regional shows were much better than the Broadway show.

The idea to replace the opinions of critics with reviews from ordinary people with the same names appeared in David Merrick a long time ago. He was stopped by only one thing – he could not find a person with the name of the oldest Broadway reviewer. When Brooks Atkinson retired, the producer decided to realize his idea. When he learned that the subway and bus companies have refused to place ads for a show, fearing of an influx of homeless people, D. Merrick wanted to help the musical. Because of his unusual idea, the theatrical even received several nominations for the Tony Award. One went to Phyllis Newman, perhaps not least because of her attire – the actress in most of her scenes was dressed only in a towel. The new production has been carried out many years later. Musical entered in Broadway history, as no one before tried to manipulate the opinions of the unaware readers. Subsequently D. Merrick became the producer of many popular musicals.
Last Update:July, 13th 2016