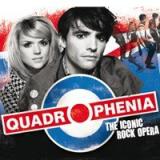 It is absolutely British thing that openly shows the rebellious youth of the early '60s. England, it is 1964; the youth is divided into two main camps: "Mods" and "Rockers". Involuntarily pops joke by Paul McCartney, when he was asked:
- Are you "Mod" or "Rocker"?
- I am "Mocker"!
This musical is about the Mods. This musical is made by the Mods. It was made in 1979, just in time for mod-revival (formation of the second wave-motion of Modes). Who knows, maybe, this musical was one of the reasons? This musical is from The Who, one of the biggest Mod groups, which at one time just disorganized the movement. It is one of the best, if not the best at all, about the British youth, about young people who were tired of gray conformism and life of conservative England.

The musical is different from others, that this time it is not shown the love on the background of the movement, but on the contrary, the movement against the background of the love! In the relationship between Stephanie and Jimmy there is much less romance than in how Cooper is worried about his Lambretta or with what trepidation he gathers a collection of newspaper clippings.

This story is about the eternal problem of fathers and children, when adults do not understand the ideals of young people. Perhaps that is why this musical has been recognized by these adults as rude? It's about the guys who want to always look cool, who liked to have fun and go to parties seven days a week, which swallowed amphetamines and arranged the major fights in 1964, for example such as Brighton’s one. This musical is about life, beating as the fountain.

Clumsy silly Jimmy is the hero of our time. ‘Quadrophenia’ is another Bible for teenagers, and it is, like ‘The Catcher in the Rye’ or, say, ‘A Clockwork Orange’ is the more valuable the earlier the reader is to be acquainted with it. However, even if the viewer does not have a girl, never swallowed any pills and wandered through the narrow Brighton lanes, but still yelling something obscene out of solidarity with the main character and feels like somewhere inside inflates a huge balloon. Time flies, the viewer is almost twenty, he has not grown up yet (well, of course!), He's sick of the free love, alcoholic parties and street fights… And he remember this movie with gratitude. Already seen, had known, has long been ready.

Dressed in the latest fashion attendants go to hell, newspaper clippings are torn off the walls, almost brand-new-looking ‘Vespa’ turns into a pile of rubble. There are Mods, Rockers and other tinsel and… there is a real you. Sometimes clumsy, childishly naive and forever lonely, but the ability to love and to experience is no worse than for everyone else and therefore, even if it is hard and painful, get up, shake off and move on in the end. You just do not deserve to be a loser. This is a mood this musical creates; along with amazingly inspiring actors' ability to play it makes ‘Quadrophenia’ a very worthy thing.
Last Update:July, 08th 2016