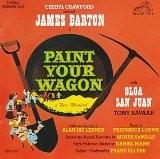 May 1853. In the wild Californian countryside old miner Ben held impromptu funeral of his friend. Soon, his 16-year-old daughter Jennifer discovered gold dust in the mud. Ben staked a plot to mine and got the documents on it. After that, in the newly formed city of Rumson (Ben’s family name) prospectors began to arrive. After 2 months, its population was 400 people. All residents of the city were men, and only young Jennifer was an exception. Geologist Jake was waiting when he would be able to save enough money to send for his wife & her girls Fandango, who performed the cancan to entertain the locals. His task was to construct a building for them, Music Hall. Jennifer felt uncomfortable in the city because of the large number of suitors. Julio Valveras brought laundry in Rumson – he lived outside the settlement, because he was Mexican. Soon, the young and handsome prospector Julio met with Jennifer. She promised to take care of his laundry. After talking with the girl, Julio fell in love with her. Prospectors began to reflect on their lonely nomadic life.

Two months later, the man demanded that Ben sent his daughter out of the city. Father remembered the girl’s dead mother – he would like to see her now beside him. Jennifer fell in love with the young Mexican. When Ben saw the daughter, dancing with Julio’s clothing, he decided to send her to school in the east. Together with his two wives, Mormon Jacob Woodling came in to the city. Prospectors have allowed him to stay only if he would sell Sarah or Elizabeth, one of his wives. To his surprise, Ben started to romance with one of the women. Soon he bought Elizabeth at auction for USD800. Angered by her father's behavior, Jennifer decided to go to the school. In conclusion, a girl promised her beloved to meet him a year later. In the city came wife of Jake, together with her girls Fandango. Soon Julio expected bad news. The plot, where he mined gold, was exhausted and now the young prospector had to start looking for a new field. Mexicans had to leave the vicinity of the town, without waiting for the return of the beloved.

A year has passed. The miners celebrated this event, enjoying Fandango girls being in town. Edgar fell in love with Elizabeth, and the woman answered him in return. Ben did not notice it – he thought that only Raymond experiencing strong feelings to her. Miner Mike told the Mexican about the lake, at the bottom of which was gold sand. Julio went into the mountains looking for it. After some time, from the east of the country returned Jennifer – she has become a real young lady. The father said that soon they would have to leave the city – the gold had already begun to dry up in the developed areas. Jennifer learned that her boyfriend went to the mountains in search of the lake. Raymond offered Ben 3000 dollars for Elizabeth. Surprisingly, it turned out that the woman escaped with a prospector Edgar. A message arrived about the discovery of gold in the 40 miles from the city. The residents started to gather in order to move to a new production site. In Rumson remained only Ben and Jennifer. An elderly man realized that his place was only in this city, and a girl continued to wait for her beloved. Busted Mexican returned to Rumson. Ember Ben greeted him. When Julio saw Jennifer, he was very happy. Now, between lovers, there were no obstacles, and they were finally reunited.
Last Update:July, 06th 2016