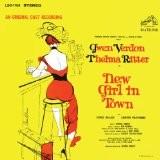 The musical tells the story of Anna, which in early childhood was sent to relatives. Care of her father turned into a tragedy. Cousins defiled the girl and forced her into prostitution. After going through all the circles of hell, poor girl has decided to return to her father, who did not even know what she had to endure. He was confident of a happy life of a daughter. Anna did not want to upset him and that’s why wrote him that worked as a nurse. At a meeting with the father, she did not tell him about the true state of affairs. Only father’s friend Marthy learned about the tragic fate of the girl. Moving to a new city, Anna decided to end difficult past, but it was not so easy.

Thanks to music, production affects the audience much stronger. Musical allows to transfer the most subtle shades of feelings of the main character of the play. M. L. Robinson showed all the suffering of Anna. She also managed to express the state of true love, first visited the girl's heart – she could not resist feelings and answered with reciprocity. Sincerity of a sailor excellently unfolded Patrick Cummings. She appeared before him, when his character was on the verge of life and death. That is why a man so passionately began to express his emotions and to tell everyone that a girl was his salvation. Love triumphs in this production, proving that genuine feelings have no barriers.
Last Update:May, 31st 2016