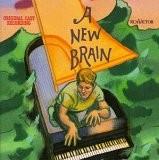 Gordon M. Schwinn is a young songwriter. The young man wanted to compose his works for Broadway, but has applied for another job to earn for living – he became an author of children's music. His boss Mr. Bungee had his own TV show, and every week he needed new songs for the frog, which hosted the broadcast. Working on the next task, Gordon realized that he was not progressing. He decided to take a break and went to a meeting with his agent and friend. During lunch, the young man lost consciousness. After an examination at the hospital, it was found out that in his brain is arterial-venous malformation. This disease might at any moment cause death of Gordon. The author required immediate surgery. Unexpectedly the doctor said that the surgery would be later, as he had bought tickets to theater on that evening.

When Gordon realized that he could die at any moment, the author was seized by a passionate desire to create the best works of his life. As a result, the young man decided to devote the rest of his spare time not to communicate with his friend, bur to write songs for a children's program. The next day, the surgeon performed operation. After it ended, Gordon fell into a coma. Mother, friend and beloved very worried about him. Being upset, Mimi, his mother, decided to clean up the house. As a result, she threw away all the books of the son, thinking that they were the cause of his illness. At this time, Gordon in a coma experienced strange visions. He was pursued by Mr. Bungee, dressed into a frog suit. Cynical boss commented on the behavior of a young man in his past life, which led the protagonist to reconsider his life and priorities. Some homeless woman was present also in hallucinations, whom Gordon often seen near his house. Lisa especially took alms only in coins from people – she said that she needed the money only for food. The image of this women forced Gordon to understand the important thing. It turns out that he was afraid to be in her place and therefore did not chase his dream.

After spending a long time unconscious, young man woke up – in this, he was helped by Mr. Bungee’s appearance. Not in the hospital, the author began to create new works in large quantities. He has written for a children's program new tracks. Now in his songs he had a soul, which immediately affected the quality of the music. Also, Gordon followed his dream, began to compose for Broadway. Now he's looked differently to the people around. The author was pleased to learn that his thrown away books fell into the hands of this homeless woman. Lisa started their sales and became an entrepreneur. The young man began to cherish the relationships of those whom he loved. Because if surgery, Gordon received the opportunity to build his life anew. Now he appreciated every second, assigned to him by fate. The author decided to implement all the dreams that he would have in the future.
Last Update:May, 31st 2016