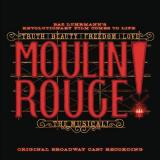 If they didn’t do “Lady Marmalade,” I was going to storm the stage. Happily, director Alex Timbers and writer John Logan were savvy enough to open their Broadway adaptation of “Moulin Rouge!” with that crowd-pleasing tune, written by Kenny Noland and Robert Crewe and immortalized by the great Patti LaBelle. But does that mean this stunning live version blots out all fond memories of Baz Luhrmann’s 2001 movie starring Nicole Kidman and Ewan McGregor? No way.

But rather than ding the show for the movie splendors it can’t replicate (those soaring views of Paris rooftops! that infinite army of dancers!), let’s revel in what Broadway actually can do for a beloved musical property: bring it to life. And shall we start with those half-naked lady sword-swallowers?

Yeah, they had us at the lady sword-swallowers. But just walking into the gaudily tricked-out Hirschfeld Theatre is a treat for audiences who know enough to arrive early. In addition to the movie’s signature elephant looming over the audience, there’s red-on-red decor and a dozen or so chandeliers, not to mention the garish mockup of the famous Parisian nightclub’s iconic windmill, flashing in lights from a balcony box.

It’s the turn-of-the-last-century in Paris, and Derek McLane’s pulsating red set invites us into the bohemian artists’ quarter of Montmartre, where “tout le monde” comes to play — and prey — at night. Everyone is resplendent in Catherine Zuber’s colorful, divinely decadent costumes as they whirl through Sonya Tayeh’s frenzied dances, frantically looking for someone or something to get them through the night.

The impresario (Danny Burstein; every show should be so lucky) of the famed and fabulous Moulin Rouge nightclub greets patrons in the enticing manner of a sideshow barker — or the master of ceremonies from “Cabaret”: “Welcome, you gorgeous collection of reprobates and rascals, artistes and arrivistes, soubrettes and sodomites …” Even a young naif like Christian (Aaron Tveit, who makes an appealing innocent), eager to plunge into this erotic world, has joined the mad crush of human bodies. Who, pray tell, could resist “Four Bad Ass Chicks,” played by zaftig Robyn Hurder, Holly James, Reed Luplau and Jeigh Madjus and costumed to kill, as they enthusiastically invite us to “Voulez-vous coucher avec moi ce soir”? (Come and get your “Gitchie gitchie ya-ya da-da.”)

Drawn in by the shameless huckster Harold Zidler (Burstein), Christian enters the club, encouraged by the lascivious blandishments of those rogues about town, the demimonde painter Toulouse-Lautrec (Sahr Ngaujah) and the great tango dancer Santiago (Ricky Rojas).

Declaring himself a songwriter, Christian tries to impress these sophisticated insiders by speaking in song lyrics: “I Don’t Want to Wait,” “Every Breath You Take,” “Never Gonna Give You Up.” And once inside the den of iniquity, the clean-cut young artist is (absurdly) mistaken for the worldly Duke of Monroth (Tam Mutu, born to wear black leather pants), a wealthy patron with designs on Satine, the star of the nightclub revue.

As cannily played by Karen Olivo, who won her Tony Award for “West Side Story,” Satine is both savvy and sweet, a dangerous combination in a woman who hopes to make her career as a heartless courtesan. Olivo can act her way past the most unconvincing qualities of Satine’s character, and you can happily hang on her love songs with Christian —gathered at great trouble and even greater cost from among the best in the contemporary songbook.

Typically, that can mean a selection like “Diamonds,” a tricky mashup of Jule Styne and Leo Robin’s “Diamonds Are a Girl’s Best Friend”; “Material Girl,” by Peter Brown and Robert Rans; and the Beyoncé bombshell “Single Ladies (Put a Ring on It).” No less tricky, it can also mean a huge production number built around a single song like “Shut Up and Dance.” Thanks to Tayeh’s inventive choreography, the well-drilled dance corps carries off thes exhausting maneuvers with Broadway pizazz.

But none of the supposed bohemian denizens of Montmartre seems the slightest bit louche. (For that all-important missing quality of sexy squalor, let us refer you to the long-running “Chicago,” still playing a few blocks north.) Whatever you say about Montmartre, you should never be able to call it too damn clean.

But in place of sex we have music, which actually isn’t a bad trade-off. More than 70 songs are heard (or briefly alluded to) in service of the plot. Madly popular choices come with echoes of their original voices, from a mere scrap of “Material Girl” to a more extended taste of “I Will Always Love You.” That’s the major danger of a jukebox musical: Good as you are, you’re still at the mercy of memory.

Taken individually, though, there are plenty of satisfying numbers to make the show a hit on its own terms — like the wonderfully revealing Katy Perry smash “Firework,” which Satine sings when she looks at her life and responsibly acknowledges the hard times ahead. (That song alone does wonders for her character, which could easily slip into star posturing.) Similarly, that great gift of love, “Your Song,” by Elton John and Bernie Taupin, becomes the lovers’ special song — and personal promise. If any lyric in the show can be called heartbreakingly beautiful, this is it: “I know it’s not much / But it’s the best I can do / My gift is my song / And this one’s for you.”

As in the film, the plot is yet another tragic story of mismatched lovers, inspired by everything from “Carmen” to “La Dame aux Camélias.” But I’m not sick of it, and nor should you be. Tales about true love transcending divergent social origins and personal destinies never go out of fashion.

It’s the same old story that poets and songwriters are still writing about today, in songs like “Nature Boy” and “One More Night” and “Only Girl in the World” and all the other tunes that Logan and Timbers have woven into this traditional — but kind of special — jukebox musical.
Last Update:July, 05th 2020