Me Nobody Knows, The synopsis 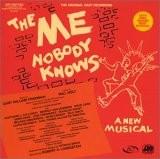 Me Nobody Knows, The synopsis

Me Nobody Knows, The Synopsis - Broadway musical

In this musical, it is hard to find a distinctive plot. It is a theatrical adaptation of the writings and letters of nearly 200 high school students from New York at the age between 7 to 18 years. All these works were collected by a single person – the teacher Stephen M. Joseph. He created a whole collection of them that received the title Children's Voices From The Ghetto. Mr. Joseph said that written on paper conveys all the feelings and experiences of children. According to the teacher, texts were created in the style ‘to keep’ and ‘like it is’, which means that they are fair and without veil talk about certain things. In parallel with the miserable cynical situation and materialistic view on the world innovative ideas begin to slip, and with them – hope. The history of each individual child is unique. Production consists of poetry and presented in monologues, songs and a final review. Letters are not similar to each other. Some reveal explicit drama, others are characterized by a comic element. In order to make the most realistic show of samples of works of students, they were intertwined with a variety of musical genres. Children's letters are reflected in rock music, classical fugue, rap and, of course, jazz.

Most critics were impressed by the vitality, passion, integrity and observation shown by young writers. According to them, texts collected by Mr. Joseph, perfectly convey a touching but sometimes ugly picture of the inner life of the city. Before us is a unified creation, which immediately affects and provides certain life experiences.
Last Update:May, 16th 2016