Me and My Girl review 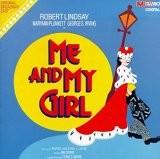 Me and My Girl review

Me and My Girl Review - Broadway musical

The Times wrote the following words about the production: in a time when violent dictators and government men speak, the whole Europe is dancing with The Lambeth Walk. This again emphasizes the good and cheerful atmosphere of this theatrical.

Through its creation, the producers draw parallels between two very different ways of life. Bohemian noble world is shaken when learns that on the title of 14th Count Hareford claims ordinary cockney, who lives in Lambeth area. Despite the existence of legal grounds, Bill immediately understands that such life is not for him. However, he does not want to give up and tries to acquire gentlemanly manners. This whole process of naturalization looks very funny and amusing. Sometimes it cannot do without the satirical jabs against the rich people, but they carry only good character. The whole absurdity of the situation, in which the rough hard worker trying to pose as a count, is manifested in an episode named Me And My Girl.

However, with all its comicality, musical raises quite important problems of human achievements and success. In most things, there is some ridicule of the protagonist. However, the finale demonstrates that all have the ability to change and even a simple cockney may eventually become a true Count. It is likely that in his position he will be able to achieve much greater success than some rich snob who cares only about his amusement and entertainment.

Quite rarely viewers have to watch the situation where absolutely all characters are presented in a good light. In this piece, simply no antagonist exist. Even representatives of the Count's family, accustomed to luxury and honed to perfection manners, are sensitive to Bill and his fiancée Sally. Duchess herself takes first to re-education. As for the girl, in adapting her to a new society, Sir John helps. The only thing where the drama of the musical is – the main characters is longing for his former life.

Decorators and costume designers done very good work. Bright costumes of the 40s perfectly convey the atmosphere, as well as look great on a background of expensive apartments staged. Speaking of the latter. Perhaps it was the first musical that used such a style of constructing the decorations. With the transition to a new episode, the overall image changes. Every time an impression is made in the audience that during the few-minutes-break creators have managed to build a luxurious apartment on the stage. At the time, this theatrical turned out very innovative project. Today it is known to fans of the theater as a classic of the first half of the 20th century, as well as the standard of warm comedy.
Last Update:May, 16th 2016