Make Me A Song review 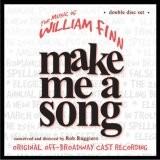 Make Me A Song review

If you are a great song-lover, then this staging is what you would be glad to see and listen to. W. Finn, a talented and outstanding songwriter, created music and lyrics for this production. We can actually hear his voice, even though the songs are performed by various actors. Their content is acerbic in particular parts. Of course, the voices themselves are quite beautiful. Take, for instance, the one of S. Wilfert or S. Binion. They and all the rest of the cast sing wonderfully from the depth of their hearts. You hear the harmony.

In fact, it is a four-person musical. Besides those gifted singers, a viewer can also see a pianist – Darren R. Cohen. It is amazing to hear, how he adds his lines between the characters’ phrases. Thus, he might be also considered one of the heroes. His instrument is just in the center of the stage, so it is difficult not to pay attention. The idea was made up by Rob Ruggiero, the director. Such technique allowed to make the performance fantastically energetic.

This play is the third thing, created by Finn during the last ten years, and it is remarkable. Some of the songs were taken from the other works of this composer, which are not that popular. We can even call the compositions personal, as they reflect Finn’s feelings. But they are not maudlin at all. Let’s just say, they are quite sober. There is probably just one song, which can make the audience cry. It is about a late friend.

The show is full of high spirits, which is able to fill the hearts of the viewers. The costumes are not extravagant as well as the decorations. But such simplicity and kind of honesty are the things, which draw our attention to the stage. The main feature here is the songs (the title indicates it as well), and nothing disturbs us from listening and understanding their content.

If you adore live music, nice and not too sentimental lyrics, absence of gaud, and are eager to fill your heart with high spirit and energy, you must watch this staging.
Last Update:May, 16th 2016