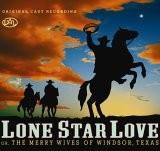 Deserter-confederate John Falstaff went into Texas with his buddies. Passing the city of Windsor, he barely escaped from the horns & hooves of cows that escaped from the corral. Two women stood on the way of animals. Because scared Falstaff behaved strangely, cowherd was divided and did not hurt Aggie Ford and Marguerite Paige. Seeing a man with traces of dirt on the chest, the wifes of wealthy ranchers began to thank him for saving. John pretended that he initially had planned to do so. The man introduced himself as Colonel of Confederate Army, but in fact, he was not. Falstaff stole his uniform, deserting from the battlefield. Soon the men came to Windsor. Having learned from their wives that John rescued them, they warmly thanked him. Mr. and Mrs. Paige were again arguing about who would be the best husband for their daughter – the nephew of the sheriff or local Frenchman. The girl wanted neither of candidates. Soon she met a cowboy and fell in love with him. But her parents were against such a fiancée.

Falstaff appeared in the saloon of the city together with his friends. He told them that he wanted to have an affair with two women at once. John was going to make Aggie & Marguerite fall in love in him. Then he would take wealth of their husbands. Pals did not like this idea, and he drove them away. He then wrote two identical love letters differ only in addressees. After receiving the message from the heroic colonel, Aggie and Marguerite accidentally learned that they were holding the same letters in the hands. The women decided to teach a lesson to a would-be lover. Aggie arranged meeting at her ranch, saying that her husband will not be home. Jealous husband decided to learn how Colonel treats to local women. He disguised himself as a Spaniard, came into the saloon, and thus found out that his wife had an appointment.

Soon Colonel appeared in the house of Aggie. Allegedly unexpected arrival of Marguerite forced him to hide in a basket of dirty laundry. Only this saved him from a furious jealous husband. Then basket with him was emptied into a muddy stream. The next day, John has received the invitation for a new meeting. Jealous husband again learned about the date. This time Falstaff had to dress like a gypsy, to avoid the wrath of husband. Soon the women told their husbands about the Colonel, letters and their intentions to give a good lesson. The four of them have come up with a plan of revenge. Falstaff got the message that Mrs. will meet with him on the night costume festival, dressed in the cow’s mask.

That same night, Mr. and Mrs. Paige would decide the fate of their daughter. They agreed each with own candidate for the abduction of Anne and marriage to the girl. The future fiancées had to rely on their costumes at the party. Maid of Miss learned about this plan and told cowboy that his beloved is in danger. She also described him a real girl’s costume that will be on her that night. Falstaff came on holiday in the mask of a bull. Women entangled him with rope while he was enjoying their attention. As a result, the colonel appeared in the face upfront of Windsor’s residents. He hardly reached forgiveness. Soon unlucky suitors came – they learned that suits were hiding guys from the ranch, not little miss. At the end, just married arrived – cowboy and girl. Parents had to deal with this choice of daughter. Taught Falstaff left Windsor.
Last Update:April, 21st 2016