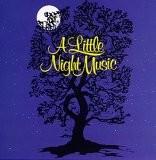 Sweden. 1900. Couples are waltzing. Madame Armfeldt told her granddaughter that summer night smiles thrice: in youth, to stupidity & in old age. Fredrik is a prosperous advocate. 11 months ago, mature man espoused a girl named Anne of 18 y.o., but she still did not give herself to her husband. Fredrik have a son, who is a year older than her stepmother. Henrik is seminarian & isn’t taken seriously by surrounding people, because of which he was severely depressed. Anne was interested in boy, but could not take him as her stepson. Soon, the young wife pledged to her consort that she will spend the soiree with him.

While the canary Desiree toured small towns, her mother took over the care of her granddaughter. Fredrik visited the show of Desiree, together with his spouse Anne. The youthful wife did not like the gazes that the canary casted on her partner & wanted to go home. Anne didn’t know about Fredrik’s & Desiree’s former on-love. Soon, a man visited the actress & they talked about personal life. When she learned that a lawyer for a long time is missing for intercourse relations, Desiree decided to help in this.

Suddenly a woman's lover arrived – Count Carl-Magnus. Lawyer & actress pretended like nothing had happened between them. When the count has returned to his home, he was full of suspicions. Charlotte knew about her husband's infidelity. Soon she found out what had happened in his mistress's apartment. Suddenly, the woman realized that she knows Fredrik – his wife was a friend of her younger sister. Charlotte went to Anne & told her about her husband-traitor. Young woman could hardly believe it. Soon Desiree asked her mother to make a party for Fredrik, Anne & Henrik. The woman barely managed to persuade Madame Armfeldt to arrange it. After receiving the invitation, Anne wanted to give it up, but Charlotte has advised her to give a positive answer. The wife could beat rival with her youth, just being nearby. Carl-Magnus decided to visit the holiday without an invitation – Earl wanted to make a gift to Charlotte for her birthday. He also planned to call Fredrik on a duel. His wife decided to flirt at a party with a lawyer, hoping to attract the attention of her husband once again.

Arriving at the Armfeldt mansion, Fredrik was surprised to learn that the 13-year-old daughter of Desiree named Fredrika. Henrik told the girl about his secret love to Anne. Soon count & lawyer began to discuss Desiree, regretting the fact that this woman is so beautiful. In the meantime, at dinner, Charlotte flirted with Fredrik; Anne began to quarrel with Desiree. Henrik could not bear it. The young man accused present ones in immorality & left them. After dinner, Fredrika told Anne about the feelings of Henrik & they went in searches for him. Lawyer admitted to Desiree that he still loves her, despite her selfishness. Anne found Henrik in the moment when he unsuccessfully tried to commit suicide. She admitted that she loves the boy. Soon, they were already at each other's hugs. Lovers have decided to escape & begin to build their lives on their own. They tried to shoot Carl-Magnus, infuriated by such behavior, but were stopped by Charlotte & Desiree & left the scene.

Countess decided to tell Fredrik about her plan for the return to her husband. Their appointment was eavesdropped by Carl-Magnus. He forced the lawyer to play with him in Russian roulette & was satisfied that the bullet grazed the ear of his opponent. Count again began to pay attention to Charlotte. Fredrik realized that Fredrika is his daughter. Revealing each other in love, a lawyer & actress decided to unite their destinies. Soon Madame Armfeldt died. Thus, summer night showed its smile for the 3rd time.
Last Update:April, 21st 2016