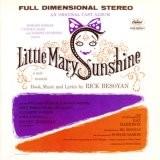 1910. Rocky Mountains. Little Mary Sunshine is having big problems with the "Colorado" hotel. The US government threatened the girl with the collection of mortgage from her inn. The building is located on disputed territory – the struggle for the land is going among the Brown Bear, the leader of Kadota tribe and the US authorities. The girl is the adopted daughter of the head of the Indians. On the advice of Brown Bear, Mary began litigation to defend the rights of her tribe to their native land.

Forest rangers under the command of Captain Jim Vorington come in the hotel soon. They have to catch the Indian named Yellow Feather, who was considered a terrible villain. In fact, his only crimes were hunting without permission and regular making of fires on the forest’s territory. But an Indian can hardly be called a good man – a man threatened to Mary, trying to make a girl to become his wife. Captain Jim fell in love with the charming owner of the hotel and tried to woo her. Seeing this, the opera singer Ernestine von Libedih, which was a long-stayer of "Colorado", gave important advice for young people.

Also, young ladies, who are soon was going to graduate from school of Eastchester, lived in the hotel. They happily spent their time, and were very happy to emergence of young soldiers. Forest rangers were also delighted with beautiful girls. Youthful hearts were fluttering due to abundance of tender feelings. Ranger Billy and the maid Nancy also fell in love. The girl was a little frivolous. Therefore, she occasionally paid attention to the other men, which very upset her boyfriend. Because of this, the lovers often had violent quarrels.

Soon Mary told Jim a secret. Yellow Feather was the son of the leader of Kadota, but he was expelled from the tribe. For a long time everyone thought the Indian was dead, until he reappeared in these places. The captain decided to capture Yellow Feather. He went on his searches, together with the old Indian guide.

In the garden of the hotel, there was a gala concerto with the participation of young students of Eastchester and Forest rangers. Retired General Oscar presented ladies a gift box. Taking advantage of the fact that at this time he was in charge, according to seniority, an elderly man sent rangers to search for their captain. All the attention of the young ladies were turned to general, but he had already begun to communicate with the opera diva. Soon Ernestine and Oscar found out that they both attended Vienna in youth. There they had the happiest days of their lives.

When Mary separated from guests, she found herself in an empty corner of the garden. Woman has been attacked by Yellow Feather. He tied her to a tree and began to threaten with a humiliating punishment. At the last second, the knife of Indian was grabbed by Jim, who returned to the hotel. When Yellow Feather tried to escape, he was captured by the forest rangers – they had time to surround the "Colorado".

After some time, Oscar reported great news – the leader of Kadota’s claim was satisfied, and now this territory belongs to the Indians of his tribe. Brown Bear has allocated part of the land to his adopted daughter – that's where her hotel was located. On the remaining territory, leader has decided to organize a national park. Now the forest rangers were able to return home.

In the final scene Yellow Feather appears. Changed Indian has become a true American and he proved this by waving the US flag actively. Many couples decide to get married. Mary & Jim, Bill & Nancy, Ernestina & Oscar, as well as a few rangers and the young lady went to the altar.
Last Update:April, 21st 2016