Leader of the Pack synopsis 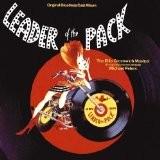 Leader of the Pack synopsis

End of 50-ies of twentieth century. In the city of Levittown of New York state lives ordinary girl Ellie. She dreamed of a great career in the music industry. The girl admits to the mother about her cherished desire – she wants her songs sounded on the radio. But mother wants more secure future for her daughter. The active nature of a teenager revealed itself – Ellie created girl’s band named The Jivettes. It included her school friends – young Mickey and Shelley. Young singers began performing songs written by Ellie. They visited hospitals, schools, charity events, and wherever they came, young trio expected the success. The audience watched with admiration their sincere and sparkling performances. The Jivettes had the opportunity to record a single on the studio of Brill Building – the girl had hoped that it might be a big breakthrough for their team. And it did.

A few years later, mother told Ellie that she had to get professional education. So the young lady was admitted to Queens College. During her studies, she found a job at a Manhattan studio of Brill Building. She managed to get herself higher salary – Ellie began to be paid 100 dollars a week. Then she had her first meeting with Jeff Barry. Soon, she wrote her first single, which became a hit. This very pleased the music studio producer Gus Sharkey – he was in doubts about the talent of Ellie. At the party, dedicated to the creator of the successful new songs, she again met Jeff. There was a mutual sympathy between them. Stormy dances were accompanied by songs about the opposite gender. Soon Ellie shared with friends Mickey and Shelley about her joy after the first kiss with Jeff.

After a brief dating, the young people decided to get married. They did not pay attention to the resistance of the family – they argued that it is not necessary to be bound by marriage so early. In 1962, Ellie and Jeff got married. Their life together marked the birth of the creative union. Together, the couple wrote many popular songs. They soon became wealthy people. Musical works of Ellie Greenwich and Jeff Barry were included in the repertoire of known performers. In 1965, the couple was at the peak of popularity. Jeff began to think about retirement – he wanted Ellie to give birth to a child and became a normal wife. But Greenwich did not suit for such a life – she wanted to write as many songs as possible. Soon, tensions arose between the spouses. Jeff decided that it makes no sense to live together if Ellie does not want to have children. As a result, they divorced.

A creative alliance between Greenwich and Barry lasted for another year. When Ellie tried to regain her former husband, it turned out that he had found another woman. After that, there was a final break between them. Greenwich began to sink into depression – she continued to love him. The marriage was for her a heavy burden – the woman had a nervous breakdown. But after a while she found the strength to begin to live and to work again. It took another few years. Ellie wrote songs that went to the world with millions of copies. She was once again on the creative peak. The woman started to give workshops on songwriting and overcame her life's difficulties. As a result, she came to the conclusion that their relationship with Jeff in the past and now the further destiny belongs only to her.
Last Update:April, 21st 2016