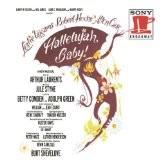 The musical is about black woman Georgina. At the beginning of the show, she appears on a scene and says that years pass, but she stays young, as her friend and mom. Georgina worked at a plantation with her mom. Mother said to the daughter that she has to be happy with her life. But the girl wants more. Her boyfriend comes and reports sad news: the police took away his prize in poker and now they have nothing to pay the rent for their house.

Harvey is a theatrical producer. He takes a girl for a role in the performance in spite of the fact that black and white can’t appear on the one scene. She has to play maid. Georgina believes that it’s better to play maid in the theater, than to work at a plantation. Then she performs in Harvey’s nightclub. Her boyfriend works as a waiter. A foreigner comes there and arranges a conflict. Georgina and Clem are dismissed, Harvey leaves to support them. They help Georgina to get it together. Then she and her mom are maids again, Clem sells a uniform. They understand that they do it to suit the ideas of white people about behavior of the black.

A financial crisis begins, and they lose jobs again. To earn money for life, Georgina returns to a scene, playing such silly parts as the witch. The show was closed, because it was silly. Clem and Georgina quarrel. Harvey convinces Georgina in his feelings to her, but their relations don't begin. Alone, the girl realizes that she didn't become more self-assured, and decides that wants to be the best, despite of everything.

In 40s, the black woman makes a contribution to military economy, acting with USO. Clem and Harvey are sergeant and lieutenant. All of them have feelings, but they are too proud to undertake anything. Georgina leaves the show. In 50th years, a woman achieves success at last. Clem doesn't approve her new activity, because now he is the supporter of the civil rights. Harvey asks Georgina to marry him, in spite of the fact that he knows that she will always love Clem.

Mother is surprised of success of the daughter. But at the party, where Georgina performs, Harvey incidentally takes her for maid. At this moment, the girl realizes that she thought only about her personal life and success. But now it shouldn’t be so. In 60s, Georgina and her mother are going to move to the new apartment in New York, which Harvey gives them. But Clem considers that it is not a place for them. He still doesn't want to live in the white society. Georgina and he continue to live together. At last, they are ready to bear each other until the end of the days, and their happiness consists in it.
Last Update:April, 06th 2016