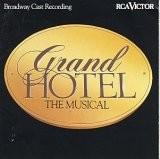 Sometimes we think about what a strange thing life is. With one people, the life is kind, with others is cruel. We are eternally running somewhere, we read something and we eat something. At first sight, it can seem to us that all people are identical, because they generally carry out things, which are similar to each other. However, it becomes noticeable that people differ, after all. The huge number of art works were devoted to a theme of such various destinies. And this amazing musical didn't become an exception.

The show has a fine direction. The director created the classical drama with romantic implication. That was the most pleasant – he didn't try to make the heroes identical. The history of the certain character is a separate plot and genre. Grushinskaya's story (the ballerina) is a drama about the lost glory. Otto's telling is the sharp social drama about the desperate person, who has nothing to lose. The history of Preysing is a narration about the brutal bureaucrat who lost values of all moral norms. Despite the differences between characters, the director managed to gather all of them in a whole.

As it was told earlier, the plot is a structure of several parallel lines, narrating about destinies of different characters. The main idea of the musical was to show that all people are not similar to each other. The grand hotel is the representative selection from the whole world, in which love, fear, hatred, offense, pleasure and death – everything is bound, just like in reality. So many years passed from the date of a premiere, and people are still vain, still pursue wealth and still are in captivity of prejudices.

Art feature of the show deserves a special praise, because the hotel showed as luxury and splendor place. Thereby they transfer the atmosphere of the 20th years. The special impression was made by the main hall with its round form (it symbolizes the whole world), about which people are eternally knocking. Suits, dresses, a make-up, dances, cars and even fights — everything in this musical gives us a visual representation about that era. The acting impresses and admires. At some moments, the falseness is felt, but when the image of the character appears more fully – the hasty opinion disappears, and on its place stays a pleasant impression from the seen. The voices of actors really bewitch. Dances in the musical are tremendous – no wonder that show received an award for choreography.

It should be noted that the musical is suitable only for adult audience: there are several scenes of violence and inter-gender sensuality. However, it doesn't spoil a look of the performance. Grand Hotel deserves the highest appreciation for its beauty and sincerity. It is the classics, which will be true for all the time.
Last Update:April, 06th 2016