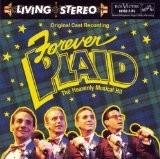 In a conventional musical, there should definitely be following 4 things: the story (which is characterized by the plot, according to the libretto), songs, dances and stage play of actors. If any element falls out of this, or almost not represented in a particular scenic production, it is not considered a musical at all. Various labels hanged on it – revue, dance show and so on – depending on particular failing item. This one drops narrative part (libretto), so this work is a revue.

As for the plot, it, unlike other revues, where the entire narration takes place through a series of songs, has some free conversations. Four old friends, met in college, form a musical band with gentle and slow songs in the genres of blues and soft jazz. They try to break onto the top of the popularity in America of 1950s–1960s. Who does not know – this period was the time of maximum flowering of such bands, and all worked strictly in these genres. Those areas that are perfectly natural-looking now – pop, rock & metal, were then completely underground creations of several much too free-minded people. Drastic changes began to take place only in the 1960s–1970s, and finally formed closer to the beginning of the new millennium, up to 2000s.

This quartet rides in their Cadillac and large school bus, carrying several dozen Catholic girls, suddenly bumps into them and passes like a plow on harrow. Four falls in Purgatory, but for some obscure esoteric reasons, cannot go anywhere and forced to return to the sinful Earth, to give their biggest concerto. Then their life ways can be considered completed. In this case, the viewer does not imposed with any metaphysical values such as God, angels, demons, and the like – this part is completely, tactfully, missed. Everything else that happens on stage – only songs that very rarely mixed with a couple of talks to link one song to another. The talkative part is completely located on the narrator.

Wondering how it can be an interesting show, where 4 men in white costumes performing songs from the long-gone 1960s, you're unlikely to find some tangible explanation other than the answer to a question: it is really interesting. At least one of the first real explanations that comes to mind – a variety of musical genres, in which this short action of just 90 minutes, is done. The second thing that fall onto memory is an amazing entertainment component of the event. Actors give jokes and funny movements, singing with horrible Spanish accent, make very fast songs, words of which are barely distinguished, use fun tips on microphones, look ridiculous, amusing, serious and, in general, have a good time on stage, giving us what is called “an entertainment” – a staple of show business.
Last Update:April, 06th 2016