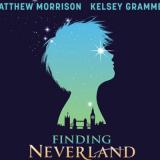 The story is a mixture of fairy tale about Peter Pan and description of life of the Scottish writer J. M. Barrie, who created this story, based on his surroundings and acquaintances.

Barrie meets the widowed woman named Sylvia, who has four children, and she has to raise them alone after her husband's death from cancer. As Barrie and his wife don’t have children, so he, being a child in the soul, actively plays with them from the heart. As well he becomes a very caring person to his new girlfriend. Barrie's wife against such a pastime, as well as mother of Sylvia, a woman of strict views and wanting to control everything in the life of her daughter. After some time, Sylvia begins to wither from an unknown illness and Barrie's wife leaves him, protesting his affair on the side. Barrie at the same time develops the basis for his novel, calling it Peter Pan, after one of the boys of Sylvia, fidget Peter, who does not want to grow up and to whom he has a strong attachment. Surname “Pan”, he could take based on following meaning of it word: "to give it hot and strong" or from other word, "pun".

This writer wants to develop a play based on a new idea, but does not want it to fall into the same sharp criticism, as well as his previous, unsuccessful work. The director of the play, Mr. Frohman, extremely reluctantly takes it into production because he does not believe that the rich theatergoers will attend it. At the first exhibition, Barrie led there many children from orphanages and they infect surrounding people with their delight and simply melted their hearts, so the play became terribly successful. Peter attended a play and realized that it was made based on the life of his family. Barrie decided to make a personal spectacle to his beloved Sylvia, who cannot visit it in the theater, because of being terminally ill, and she is too weak to walk. He brought the actors, make-up and costumes to her house, and in the final stage, her children helped her to enter into another room under the guise of that it was a Neverland. In the next scene, the viewer sees the funeral of Sylvia after her death. The statement of her last will contained an indication for Barrie to take care of her children as they agreed before.

Peter sitting on a bench reading a script of Peter Pan, in the same place where they had met with Barrie for the first time and the latter comforts Peter, exhorting him that the life goes on.
Last Update:April, 06th 2016