Darkness and Trees lyrics - Come From Away 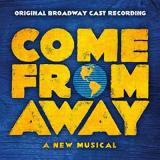 ALL
Off of the airplane

FLIGHT ATTENDANT (spoken)
Ladies and gentlemen, you can take only your carry-on items.
Any checked luggage will remain in the hold

ALL
Into the airport

ALL
Out of the windows

ALL
Darkness and trees

BOB (spoken)
As we enter the airport, all those car lights are still aimed at us

KEVIN (spoken)
The airport looks like something left over from the Cold War. Kevin is like:
Oh my god. We've gone back in time

BEVERLEY (spoken)
There's a giant map on the wall of the airport
and someone has written in red marker, "You are here."

CUSTOMS OFFICER (spoken)
I'm sorry. The pay phones are out of order

CLAUDE (spoken)
11:48 pm. Busses and driver are now taking passengers to shelters,
not just in Gander, but also to Gambo, Appleton,
and farther communities of Lewisporte, Norris Arm, and Glenwood

COMPANY
Our bus sits there forever
While all the others leave
Finally, this other passenger gets on
This guy from the Middle East
Someone says he got questioned
Some says he got searched
And now he's on our bus

JANICE (spoken)
I try to interview the Red Cross, the Salvation Army -
but they've got more important things to do than talk to me.
That's when I see them, the Plane People, through the bus windows.
The terror on their faces. They have no idea where they're going

BEVERLEY (spoken)
They take me and my crew in a separate van and I'm looking out the window,
trying to see where we are, but it is pitch dark.
I've flown over this area hundreds and hundreds of times. And it is just darkness -
hardly and lights anywhere. And now here I am. Oh my god, this is just so remote

MEN
Into the darkness

WOMEN
Stars and the moonlight

MEN
But all around us

WOMEN
Nothing but darkness

MEN
Out of the windows

WOMEN
Into the darkness

ALL
Darkness and trees

GARTH (spoken)
Every school bus we got is goin' back and forth all night. Out to the Salvation Army Camp,
we've delivered passengers from Germany, England, and France.
And around 3 in the morning, my bus is designated to take
all these African people out there. So we starts driving into the darkness

ALL except GARTH and MUHUMUZA
Into the darkness

MUHUMUZA (spoken)
My family and I try to see out the bus windows. No one tells us where we are going

ALL except GARTH and MUHUMUZA
Onto a gravel road

GARTH (spoken)
Silence comes on the bus. We get outside of Gander and you could hear a pin drop

ALL except GARTH and MUHUMUZA
And all around us

MUHUMUZA (spoken)
My wife and daughter are scared. They ask me what is happening and I do not know

ALL except GARTH and MUHUMUZA
Darkness and trees

GARTH (spoken)
Behind me, this big man comes up to me and he says in this low voice