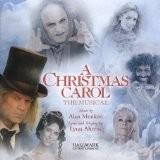 To be honest, it is difficult to understand why this classic story has been staged as a musical for the first time only in 1994. For example, even Muppet Christmas Carol was made in 1992 – when the national wealth of the literary creations by Charles Dickens were so much assimilated with the minds of people that no unoccupied niches left, except of A Muppet Show, which entertains us for decades. Its creator, by the way, Jim Henson, passed away in 1992 and this film was dedicated to his memory. That was not a musical, but also had a lot of songs, good dialogues, and it was one of the most prominent personifications of this classic story.

Because the basic story is short, it may contain many variations that add parts creating a new image every time. But always its essence lies in the fact that being an infinite miser – is not an option, nor even a form of acceptable existence.

By the way, not only that Scrooge has become the basis for beloved cartoon character Scrooge McDuck. Few people know that this story does not teach how to become a generous purchaser. First of all, it teaches of how good it is – being a philanthropist, and a full member of society when you realize that you can do much because of your wealth (change the world, make it better, to help truly needy people). When you realize you only become richer when giving back, along with the person to whom you give (such a cute paradox). Good, strong and genuine positive emotions – that's what this world has as one of its best values, and many people have already understood that. Being a philanthropist (and this is shown by the same Scrooge McDuck in the last cartoons) – it is more addictive action, stronger than any drug and physiological act of coitus, how great wouldn’t it be.

Incidentally, many languages have derivatives from the word Scrooge in their vocabularies, which means approximately similar notion. Ukrainian, Slovenian, Polish, Czech – they all have the concept of a miser, poverty, including extreme poverty based on the phonetics of “Scrooge” word. Rooting of the derivative is more than a couple of hundred years, very solid. For example, even for a very long time one of the modern nominal names “googling” will not be a full replacement of word “searching”, while Scrooge rooted in Slavic languages with the same value long ago (for example, “scroota” – in one of these languages means "extreme need"). This all suggests that Dickens was a great explorer and this man came up with Scrooge name not from the scratch. Just as the name of the well-known character Chewbacca was chosen by George Lucas, based on the Ukrainian word «sobaka», which means "dog".

In this particular musical, we note, first of all, the costumes, which are almost authentic to the time, which is described by Dickens in his story. This play teaches us all, but especially children, of the importance of good and intelligent economy, but not so terrible meanness, as shown by Ebenezer Scrooge.
Last Update:April, 06th 2016