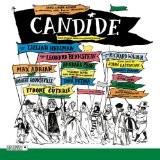 This musical does not have some kind of plot, all events are situation comedy – sitcom – occurring consecutively. None of the aspirations of the heroes are expressed nor they reach them. The musical tells the story of four main characters and Candide is the name of one of them. This man is an illegitimate nephew of Count. The count is also has beautiful and radiating bundles of libidinous voluptuousness maid named Paquette, daughter-virgin named Cunegonde, and the son Maximilian, very egocentric personality.

All these people are constantly involved in sitcoms:
• the revolution in Westphalia, with the result that the county is abolished and they are overthrown;
• someone always stick to Paquette, a maid, with the aim to seduce her;
• they are captured by pirates and go through war;
• some of them are sold into slavery and taken to the army, which is opposed to a monarchism;
• girls travel between brothels and other public homes, where they perform an understandable role;
• on the way the characters even go to heaven on Earth – the legendary Golden City of Eldorado, which is inhabited by creatures who do not know hunger, injustice and all there are infinitely happy and live in harmony, even animals.
In addition to the said designation, much more happens to them.

It's a comedy, which purpose is not to tell the story but to show the sitcom and to act a funny thing.
Last Update:April, 06th 2016