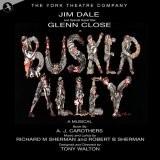 This musical is not bright, but it has a long story. Initially, at the beginning of the last century, the German writer on social issues Heinrich Mann had an idea that emerged in the novel in 1905 (when he was 34 years old). This writer was born in the European German city, remarkable Lübeck, which is famous for its magnificent architecture, Gothic cathedrals and incredibly beautiful, as if personifying a postcard with pretty well-kept and clean German houses. In 1933, the writer was forced to flee to USA, fearing for his life when the Nazi came to power.

After a story, as a result of promoting of it by the writer, who could now create freely, 5 years after arrival in the US, the screens saw the film with Vivien Leigh, whom the world knows as Scarlett O'Hara from Gone With The Wind. By the way, this film was 1 year after Busker Alley and completely eclipsed it with its meaning. It is a pity that this actress died of tuberculosis at 53 years old, and in 2015 her childless daughter Suzanne Farrington passed away, also an actress, interrupting their ilk.

The film was not known, forgotten until 1960, when it was accidentally discovered in the archives and it was decided to stage a musical. 1969 was the first attempt to revive it that did not work – no one was interested in it. 13 years later, a second attempt with the same unfortunate result took place and yet 12 years later – the third try, this time successful. Each time the story was rewritten and adjusted to the realities of the current time, so from the book of 1905, only a little remained – just an idea and concept, because all content has changed as much as 4 times. The musical never reached to Broadway, stopping with a broken leg of the main actor, in connection with which the producers decided to halt it. Then, from 1994 to 2006 it had variable (but often – bad) results on different stages, but could not stand nowhere for more than a couple of months of running. When it included the stars of the musical Barnum, it gained some popularity, but still was at the level of "musical for 1 season".

This musical has a bright influence of cockney – British creators Sherman brothers, who made in their careers things like music to Mary Poppins and My Fair Lady. Besides the fact that Mary Poppins is an independent musical on Broadway, Mary Poppins rather attract much more attention than one considered here. It is not that it is bad, but it had a plot clearly below the average, which can be considered as a set of clichés and there is nothing literally interesting, for which you can catch on in terms of it. No twists of the plot, no outstanding songs or bright literature of libretto or lyrics. Stage design, sound and light, as well as the costumes – all this is pretty mediocre.
Last Update:April, 06th 2016